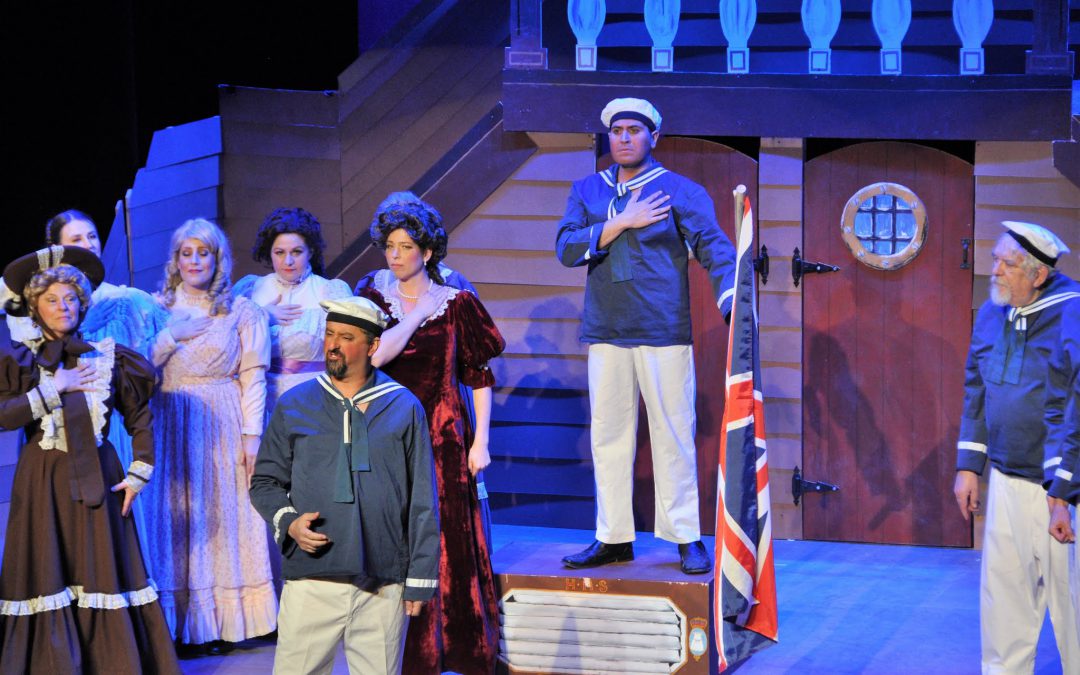 As I had mentioned a few days ago, I had the opportunity and honor of performing with Troupers Light Opera Company in their curtain raiser, Victor Herbert’s “The Magic Knight.” It was through this casting I also got to play “The Boatswain” in Gilbert & Sullivan’s “HMS Pinafore.”

When I originally auditioned for The Magic Knight, it was the intention to only be in the one show. I knew they had already cast most of HMS Pinafore, but still needed the baritone role filled for Bill Bobstay (the actual name of The Boatswain (pronounced “Bo’sun” to those not in the know!), although never mentioned in the operetta). I sang my audition piece, and the committee all agreed that I should be The King for the Herbert work, but asked me then to read for the Boatswain. They twisted my arm (gently), and I wound up in two roles.

A lot of the cast from The Magic Knight were in Pinafore, but with some notable additions. The fabulous soprano, Brett Kroeger, was a brilliant Josephine with a stellar vocal presence and hysterical comedy chops. David Schancupp and Frank Sisson, playing Sir Joseph Porter, KCB and Captain Corcoran respectively, were suited foils with the appropriate G&S stylings one would expect. Dick Deadeye was played by Bob Scrofani. I can’t imagine Dick being played any other way. His performance was particularly funny indeed! Wendy Falconer’s Buttercup was also well performed—Wendy is a solid mezzo and her character portrayal was right on the mark. Alan Briones as Ralph (pronounced “Rafe”) was charming and florid—he really got the two spot on roles between The Magic Knight and Pinafore. And when joined by me and Neil Flores as the Carpenter’s Mate, I’d have to say we did a great “British Tar” trio!

The director was Emily Trudeau, who was a lot of fun to work with. I really appreciated that she took everyone’s expressed opinions under consideration and often involved the cast’s creativity into the production. That’s how I got my idea of having some international flags up my sleeve for my big (and only) solo in Act II. Our music director was Eric Kramer, who kept all of us musically honest! Eric really cared about the ensemble sound and expressiveness.

Missed the performance? Here it is!